Our mission is to document and classify the vast diversity of Life on Earth, recent and extinct, and make the knowledge available for science and society. Through global scientific collaboration, enrichment of our collections, and the training of young scientists we contribute to the never-ending quest for the 'Tree of Life' that help us to explain how life evolved and diversified on our planet and helps us safeguard its future.

Insights into the microbiomes of insects: Odonata, Orthoptera & Heteroptera 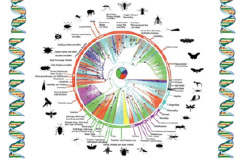 The microbiomes of seven insect species belonging to Odonata, Orthoptera & Heteroptera are examined. Bacteria associated with the gut of these insects are identified by sequencing their 16S rDNA gene, and microbiomes are compared in a context of host ecology. Bacterial phylogenies are constructed to compare with previous published data on insect–bacteria symbioses as well as free-living bacteria, and the possible association between the sequenced bacteria and their insect host is discussed.

Symbiosis between birds and their intestinal microbiota

The Digestive Tract Microbiota (DTM) of bird species spanning the major groups of passerine birds were investigated. The project involved fieldwork in Papua New Guinea as well as laboratory work to extract DNA and sequence the 16S rDNA gene to identify the microbial communities. This project sheds new light on the symbiosis between birds and their DTM and explores associations between the microbiota and birds’ abilities to adapt and exploit novel niches.

Insect dispersal in space and time: insight from the study of beetles (Coleoptera) of the Danish oceanic island Læsø

Læsø is a small and beautiful ca. 3000 years old Danish oceanic island. How did it get its insect fauna? How small beetles could cross >20 km of sea separating Læsø from Denmark or Sweden to colonize it? To answer these Aslak statistically analyzed a dataset for 1075 rove beetle (Staphylinidae) species of the area (of them 306 species on Læsø) to find traits possibly helping some species to colonise the island. Also he explored Læsø and mainland populations of an apterous species Carabus arvensis (Carabidae) by means of genome wide SNPs analysis. Overall his results show that 20-40 km water stretches isolating Læsø do not act as a strong barrier for beetle dispersal to the island. Rather, ecological factors like habitat availability have stronger effect for successful colonization. The project was especially fun because of fieldwork in Jutland, Sweden and Læsø.

Images were produced of 44 selected species of Danish butterflies. The images were assembled in a catalogue in iBooks Author. The catalogue is navigated according to the dominant colour of the animals and by scrolling the image galleries. Besides the animals from the collection imaged the catalogue also includes images of live animals from nature, mostly made available by nature photographers. The butterfly catalogue is to be a part of the more comprehensive insect guide BugDex being developed for teaching at field courses at Copenhagen University which will also be released to the general public. In the past three years several similar student projects have been conducted at Biosystematics for various insect groups which function as drafts for parts of BugDex.

Furthermore, the project also included a short discussion of possible causes for decline in Danish butterfly diversity during the past century. 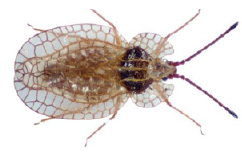 Based on collections from Danish museum, newly collected samples and information from Danish amateur entomologists through the portal “Fugle og Natur”, the distributions of Danish species of lacebugs (Family Tingidae) and piesmatid bugs (Family Piesmatidae) are mapped. Changes in distribution through time are discussed. Potential species, i.e., species that can be expected to arrive in Denmark, are also discussed. Identification keys for Danish and potentially Danish species are included. The records on which the maps are based are uploaded to the GBIF portal. 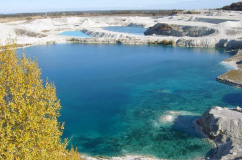 It remains a mystery how life in the oceans reflourished following the mass extinction 66 Mya. This project uses the 63 Mya Faxe limestone quarry as the setting for studying the crustacean diversity of a cold water coral reef relatively shortly after the mass extinction. Some crustaceans, such as the decapod family Galatheidae, have survived to this day without major morphological changes. Other taxa like the Dromiopsis genus became extinct. The fossil crustacean diversity has been compared with literature data from a recent cold water reef, the well-known Lophelia pertusa reefs off Norway. The project took place in collaboration between the Natural history Museum of Denmark and Geomuseum Faxe. 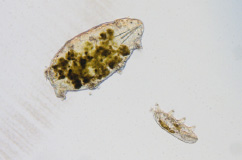 Specimens of the phylum Tardigrada, collected at Iceland, first believed to be a new species of the tidal genus Echiniscoides, primarily due to divergence in color of the intestine. The specimens were examined using light microscopy and scanning electron microscopy (SEM). Data gathered was compared to all known traits and newly acquired molecular data on the genus Echiniscoides with special focus on E. hoepneri. The special focus on E. hoepneri was justified by the relative short geological distance between Iceland and Greenland – and the new results from the molecular data. In comparison with the morphological traits we have found some inconsistencies with the original description. We have through our investigation come upon some new details in regards to the structure of sensory organs here among the cirri and their terminal ends and the presence of p1 (sense organ on first leg). We have included new measurements that might help in the future study of the genus Echiniscoides. Males were never found!